This is an interesting question, and gives us the opportunity to flex our algorithmic muscles again. This time we’ll be basing our solution on a modified version of the Levenshtein distance algorithm for finding the “edit distance” between two strings.

However, starting on that same Dm chord and playing an Em chord on the top four strings is a more difficult transition. We need to change positions on the fretboard, and every finger in the chord needs to be moved.

The family of “edit distance” algorithms tackles a similar problem. How difficult is it to transform one string into another, given a set of operations with fixed costs?

In the classic Levenshtein distance algorithm each of the three basic operations has a unit cost (a cost of 1). This doesn’t always have to be the case. We can modify the algorithm to use our own set of operations, like “place finger”, “lift finger”, “move finger”, and “slide finger” to model how we transition from one chord to another. These operations might have a variable weight, depending on the operation and how far each finger has to move:

Let’s start by defining a new module that will hold our new distance/2 function:

Obviously, if we pass in two identical chords, the distance between them is 0.

A more interesting case occurs when we’re comparing a chord with one or more notes to an empty list. The total distance between these two “chords” is our “place finger” cost applied to each of the remaining notes in our chord:

We’ll need to handle the inverse case as well:

The real meat of the algorithm comes into play when it’s time to determine the distance between two non-empty chords:

As you can see, our distance/2 function is recursive. At every level of recursion, we calculate the distance required to transform chord_a into chord_b by first:

The initial choice with the lowest final cost is the choice we pick. Our decision ripples up through our stack until we’re left with the final, minimal cost of transitioning from chord_a to chord_b.

We’ll start with some trivial base cases. If the two notes we’re comparing are the same, the distance between them is 0:

If the first “note” is nil, we’re actually being asked for the cost of placing a finger:

Similarly, if the second “note” is nil, we’re being asked how much it costs to lift a finger:

Now things are getting interesting. If we’re asked for the distance between two notes that live on the same string, we’ll report back the unit cost, as we discussed earlier:

However, if the two notes live on different strings, we’ll treat out guitar’s fretboard like a grid, or city block, and return the “manhattan distance” between the two notes:

And that’s really all there is to it.

Going back to our previous examples, going from our Dm on the middle four string set to an Em on the same string should have a cost of 4. We’re just sliding each finger up two frets:

The cost of transitioning from that same Dm chord to an Em on the upper four string set should be higher than 4:

The Next Best Chord

And now for the grand finale. Let’s say we want to find the set of Cmaj7 voicings that have the best voice leading between our starting G7 chord. This is old hat from our previous articles:

Finally, we’ll take each fingered chord and render it to the console: 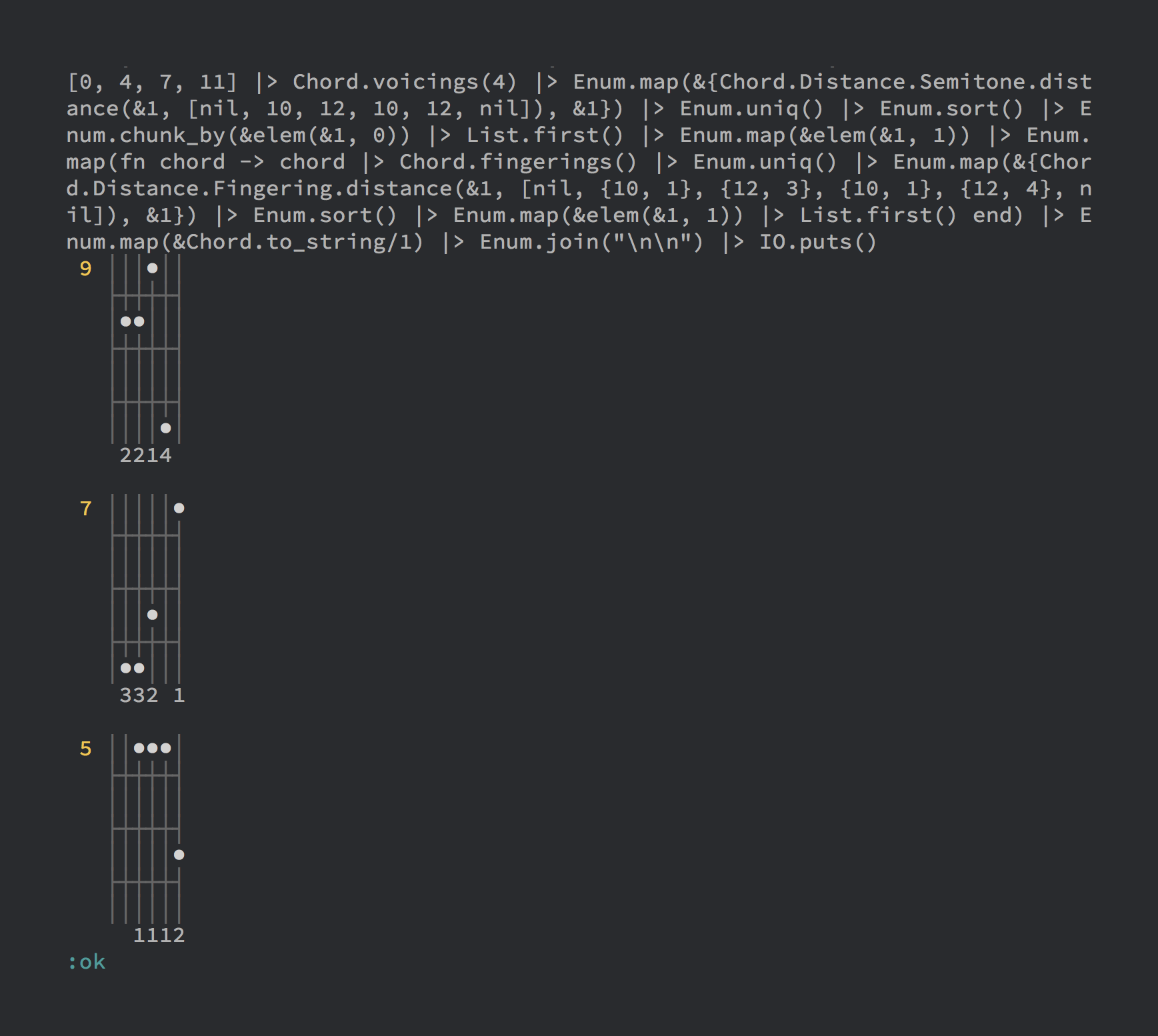 If you can’t tell, I’m in love with this project. I’ve been playing with it quite a bit in my free time, and I’ve managed to coax it into generating entire progressions for me that sound and play beautifully.

If you’re interested in seeing me put more work into this, and potentially develop it into a fully-functional web application, let me know on Twitter.

This article was published on August 27, 2018 under the ChordElixirMusic tags. For more articles, visit the archives. Also check out the work I do, and reach out if you’re interested in working together.