Last time we wrote about using Elixir to generate all possible voicings of a given guitar chord to find the voicing with the best voice leading between another chord.

While this was great, there were several issues. We were conflating the idea of “musical distance” and “physical distance” when calculating optimal voice leading, and we weren’t taking the playability of the progressions we were generating into account.

To address both of these issues, we need to know not only which voicings are possible for a given chord, but also how each of those voicings can be played. We need to generate all possible fingerings for a given guitar chord voicing.

This sounds like a fantastic excuse to flex our Elixir muscles!

We’ll start our journey into calculating all possible fingerings for a given guitar chord by creating a new Elixir module, Chord.Fingering, and a new fingerings/1 function:

Our high level plan of attack for computing possible fingerings is fairly straight forward. Given that each chord is a six-element array of frets being played, like [nil, 5, 7, 7, 6, nil], we want to:

Before we dive deeper into our solution, we should take a detour and talk about how we’re computing fingerings.

Our solution takes inspiration from the “Sieve of Eratosthenes”, which is a clever technique for calculating prime numbers. The basic idea of a “sieve” is that a choice made now can be used to filter out future unwanted results.

To bring it back to our situation, imagine we’re trying to play a D minor chord on the fifth fret: 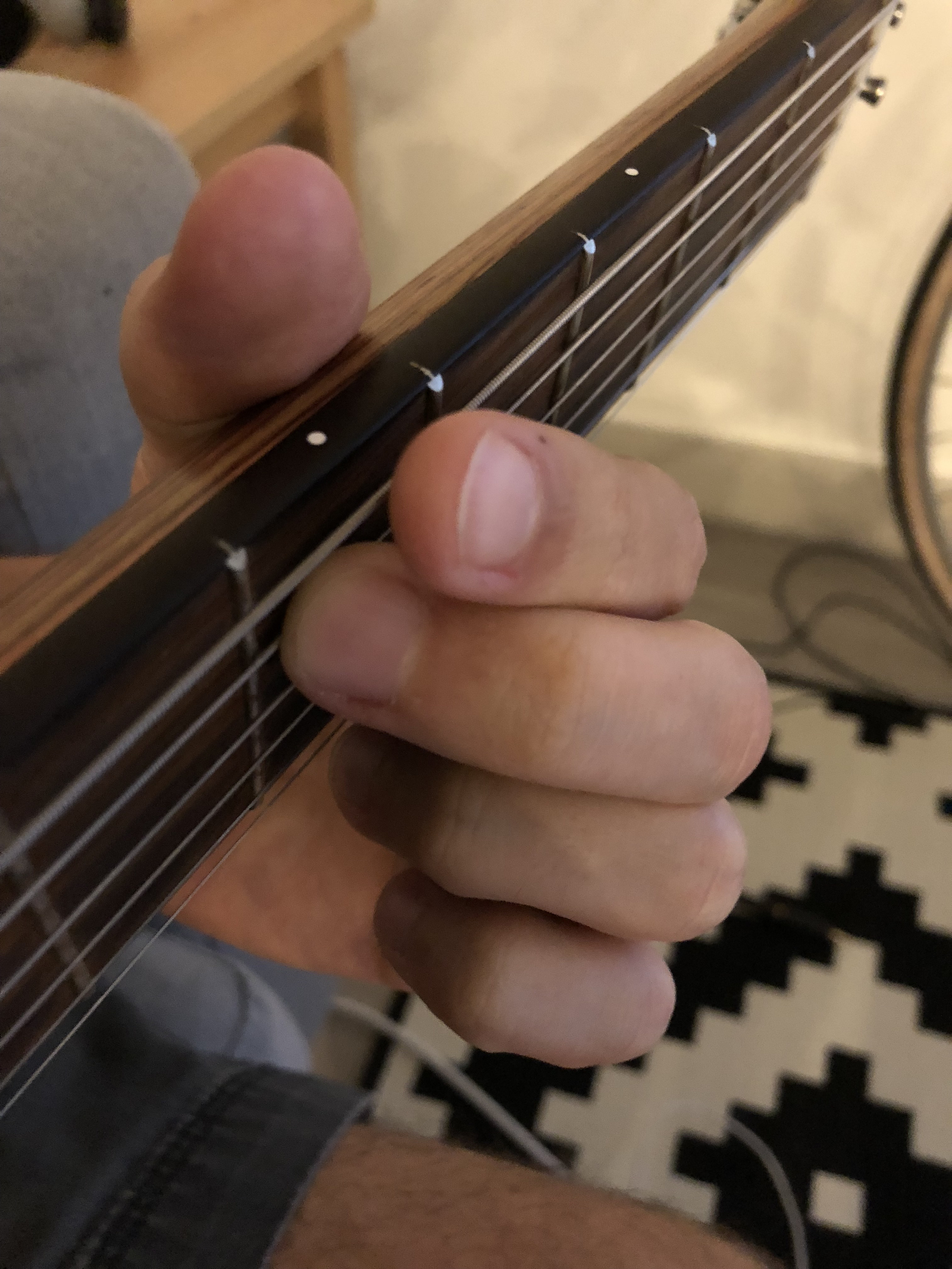 We can't use our first finger anywhere!

So by choosing to use our second finger on the fifth string and fret, we can sieve out the possibility of using our first finger on any of the remaining notes.

If we think about it, we can also sieve out the possibility of re-using our second finger. A finger can’t be re-used unless it’s forming a bar or a double-stop on an adjacent fret.

Our remaining set of possible fingers for the remaining notes are fingers three and four.

The meat of our algorithm lives in the choose_and_sieve/2 function, which takes an initial chord, complete with “possible fingers”, and a fingerings argument that defaults to an empty list:

The fingerings argument will be used to hold each finger choice for our chord, as we choose them.

Our choose_and_sieve/1 function expects each element of chord to be a two-element tuple, where the first element is the fret being played, and the second element is the set of possible fingers that could be chosen to play that fret.

Our attach_possible_fingers/1 helper function transforms our initial chord into that expected structure:

As we’ll soon see, chosen fingers are appended onto fingerings in reverse order, so we reverse/1 our list to reorient our strings. Lastly we turn our fingerings list into a tuple so that we can safely flatten/1 our resulting list of fingerings without losing our groupings.

Once flattened, our cleanup/1 function maps over this final list and converts each tuple back into an array:

Moving on from our base case, it’s time to start thinking of other simple to handle situations.

If the next element in our chord list is an unplayed string (nil), we add it to our fingerings list and designate it to be played with no finger (nil), and recursively call choose_and_sieve/2 on our remaining chord:

Similarly, if the next element of our chord is an open string, we’re recursively call chose_and_sieve/2, passing in our remaining chord, and our set of fingers appended with the open string played with no finger (nil):

In the case of actually needing to finger a note, the situation becomes more complicated. In that case, the next element of our chord is a fret and some set of possible_fingers.

We’ll map over each of the possible_fingers, appending each finger and fret to our list of fingerings, sieving out any now-impossible possible_fingerings from the remaining notes in our chord, and then recursively calling our choose_and_sieve/2 function with our newly sieved chord and new_fingerings:

The sieve_chord/2 helper function maps over each of the notes in what’s left of our chord, and updates the possible_fingers tuple element to sieve any fingerings that are now deemed impossible to play after placing our most recent finger:

The bad_finger?/3 function runs each finger/fret combinations through four rules used by our algorithm to determine if a finger choice is “impossible”, and should be culled from our possible_fingers set:

If any of those rules are violated, the finger is rejected.

The first two rules check if a possible finger would need to stretch over or under an already placed finger, respectively:

The third rule verifies that no finger can be used twice, unless when performing a bar or double-stop over adjacent frets:

Finally, we need to prevent “impossible bars”, or bars that would mute notes played on lower frets: 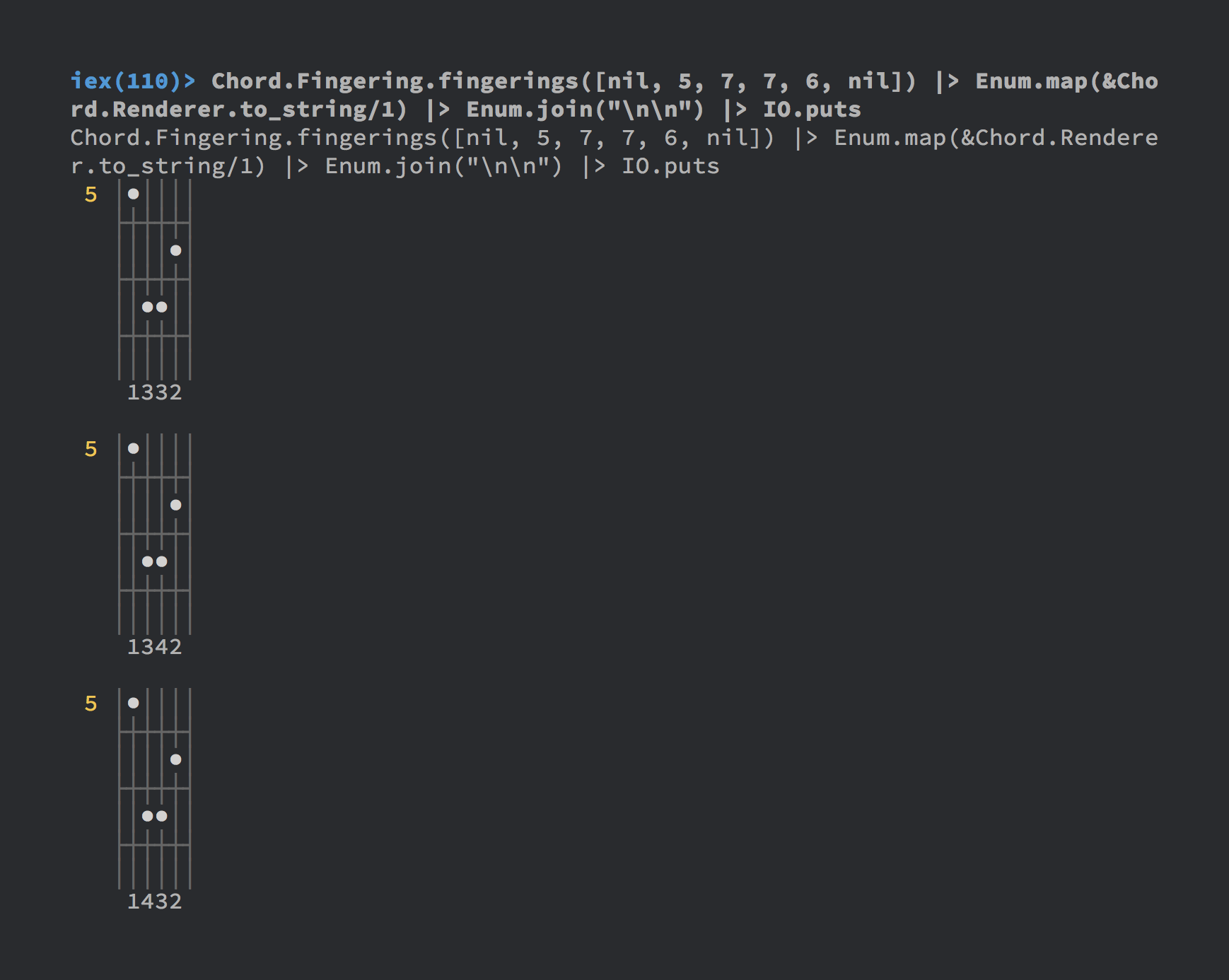 Fingerings for our D minor chord.

Awesome! The first suggested bar can be difficult to play, but with some practice doing Ted Greene-style double-stops, it’s manageable. The second and third suggestions are what I would normally reach for.

Another interesting example is an open G major shape: 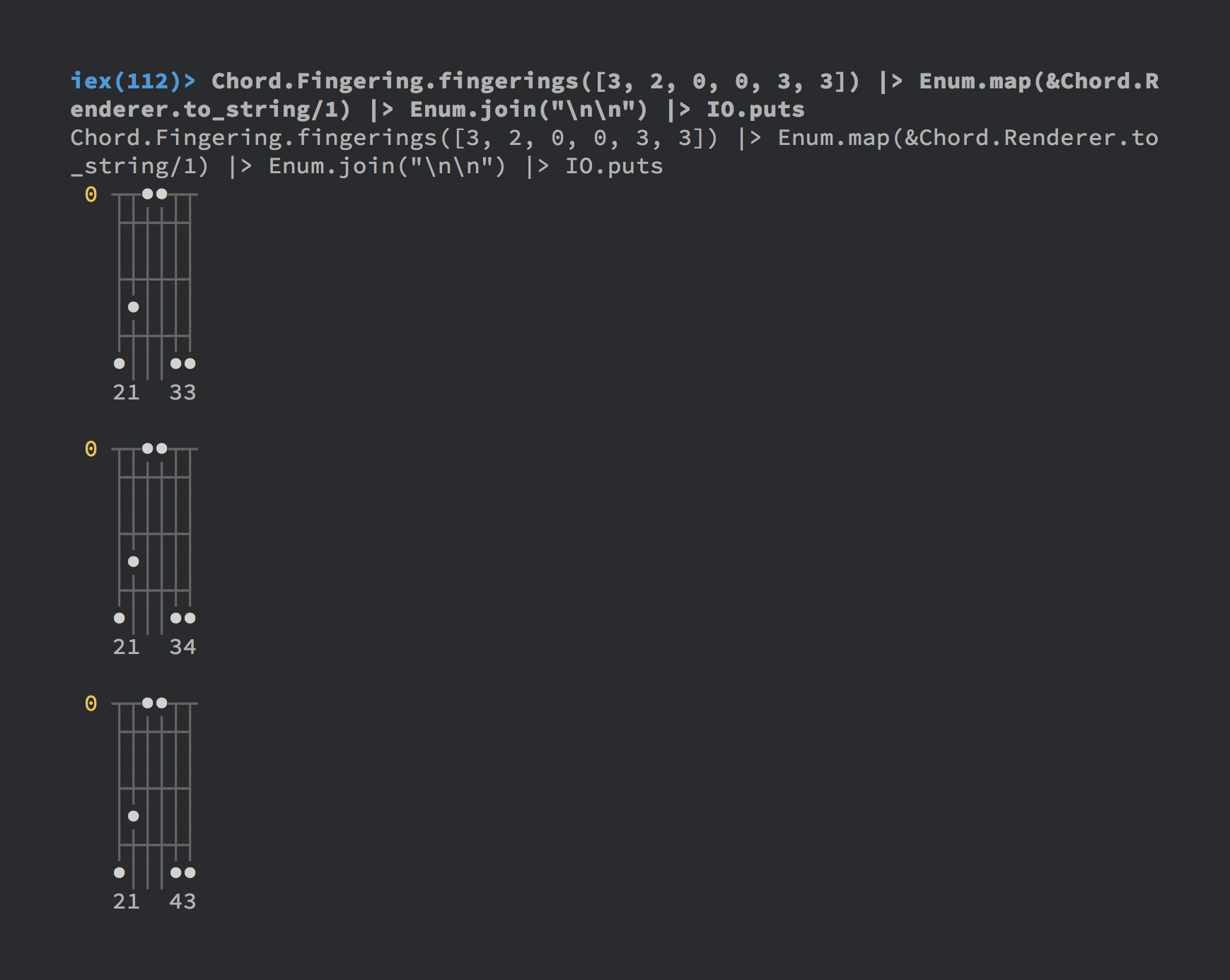 Fingerings for our G chord. 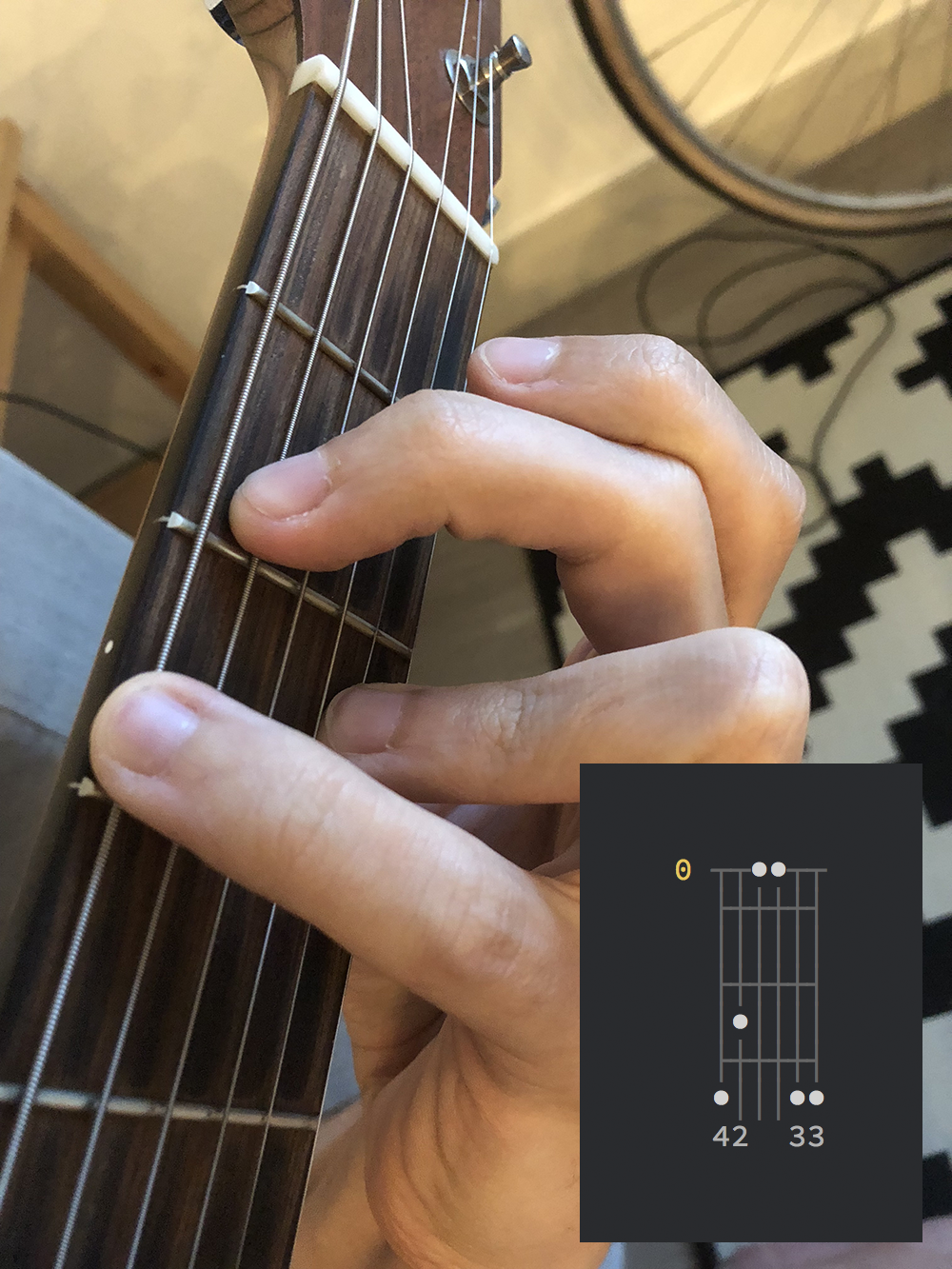 As a human, I can explain to you why this is difficult to play, but I haven’t been able to come up with a general rule to add to our rule set that would prevent these kinds of fingerings from being suggested. At this point, I’d rather have the algorithm present potentially impossible fingerings, than have it over-aggressively prune possible fingerings from the result set.

If a set of chords all have the same “musical distance” from a given starting chord, I want to choose the chord that has the lowest “physical distance”. By “physical distance”, I mean literally fret distance, but also how difficult it is to transition from one chord to another. Do I just need to slide one finger? That’s easy! Do I need to lift and replace three fingers while sliding the fourth? That’s not so easy…

Why is that cool?

Be sure to check out the entire project on Github, and stay tuned for more.

This article was published on August 13, 2018 under the ChordElixirMusic tags. For more articles, visit the archives. Also check out the work I do, and reach out if you’re interested in working together.