Let’s take a minute to refresh ourselves on how J’s hooks and forks work, and then see how we can use them to write some truly grammatical code.

If you think back to our last conversation about J, you’ll remember that we defined the mean verb to be a fork composed of three separate verbs: “sum” (+/), “divided by” (%), and “tally” (#).

All together, these three verbs form a fork that calculates the average of any list passed into it:

Similarly, we can create a hook by composing any two verbs together. For example, we can write an append_mean verb that forms a hook out of the “append” (,) verb and our new mean verb:

Unfortunately no amount of squinting will make this look like a real-life hook.

The inner workings of J’s hooks and forks may seem a little complicated, but that low-level obfuscation leads to higher levels of clarity. Namely, we can read our hooks and forks like English sentences!

Writing with Hooks and Forks

Imagine we want to construct the Mandelbrot set using J. To test whether a complex number belongs to the set, we repeatedly apply an iterative function to it. If the result of that function ever diverges to infinity (or exceeds a magnitude of two), the point does not belong to the set. If the number hasn’t diverged after some number of iterations, we can assume that it belongs to the set.

In terms of implementing this in J, it sounds like our best bet will be to store the result of each iteration in an array of complex numbers. The first element in the array will be the point under test (skipping z₀ for convenience), and the last element will be the result of the last application of our iteration function. With that in mind, we can write a verb that computes our next iteration, given our list of z values.

You’ll notice that next is a fork. The argument application rules follow the structure we discussed above, but we’re able to read and write the expression linearly from left to write.

While we’re able to compute the next iteration of our Mandelbrot set equation, we still need to append the result back onto our list of z values. In plain English, we want to “append” (,) the “next” (next) value:

Just like our earlier example, append_next is a hook.

We can repeatedly apply our append_next verb to some initial value:

Or we can do that more concisely with the “power” (^:) verb:

As a final piece of magic to top off this exploration into J, let’s apply our apply_next verb repeatedly over a grid of complex numbers:

We’re left with a three dimensional array of complex numbers in our mbrot noun, representing the values of z resulting from repeatedly applying our append_next function to each point in our grid of complex numbers.

As we mentioned earlier, if any of these values of z exceed a magnitude of 2, we can assume they diverge and aren’t a part of the Mandelbrot set.

We can compute that divergence test and render the resulting using viewmat:

And we’re left with a pretty picture of the Mandelbrot set! 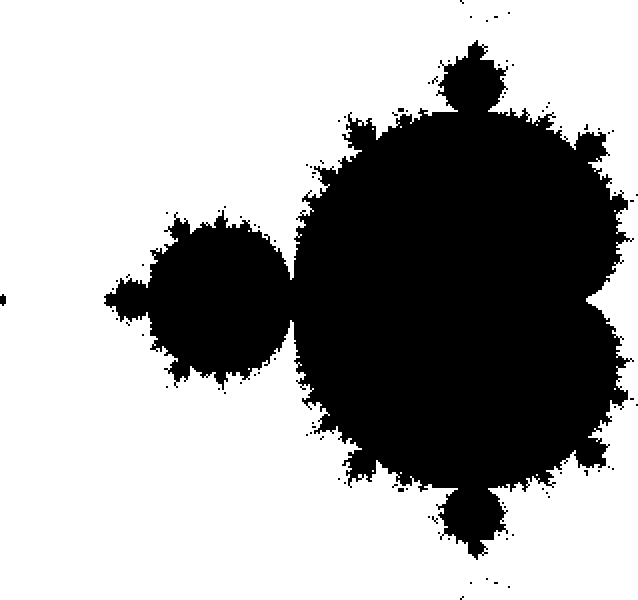 It’s no joke that J can be an intimidating language to work with. I’m still trying to lift myself over the initial learning curve, and some of the expressions written above still take some concentration on my part to grok their meaning (even though I wrote them).

That said, there are some incredibly unique and interesting ideas baked into this language, and I’m getting a lot out of the learning experience.

This article was published on April 16, 2018 under the FractalsJProgramming Languages tags. For more articles, visit the archives. Also check out the work I do, and reach out if you’re interested in working together.

Hex Dumping with Elixir – Is it better to call out to an existing external tool, or roll your own solution to a problem? Climb down this rabbit hole with me as we implement a hex dump utility in Elixir.