It’s been almost two months since I announced I was working on a security focused SaaS application called Inject Detect.

I had lots of ideas about how I wanted to build out Inject Detect. To keep myself accountable and in an effort to iterate in public, I’ve decided to put together a progress report.

Let’s dive into how my plans have played out, where I’m at in the project, and most importantly let’s talk about when Inject Detect will be ready to use!

Since it was announced, I’ve been making steady headway on both the front-end and back-end components of Inject Detect.

The front-end of Inject Detect is being built as a React application, backed by Create React App tooling. On top of vanilla React, I’m using Apollo client to integrate with my Absinthe-powered GraphQL back-end.

So far, this combination has been a dream to work with.

The productivity gains I’ve experienced working with React and Apollo is off the charts. After climbing over a few learning curves, I’ve found myself effortlessly cranking out feature after feature.

I’m addicted to the GraphQL workflow.

The front-end of Inject Detect is still heavily under construction. I’ll be the first to say that I’m no designer. I’m using Semantic UI as the base for most of my designs and tweaking from there.

Overall, I’m very happy with the progress I’ve made so far on the front-end.

Check out a few screen shots to see where I’m at: 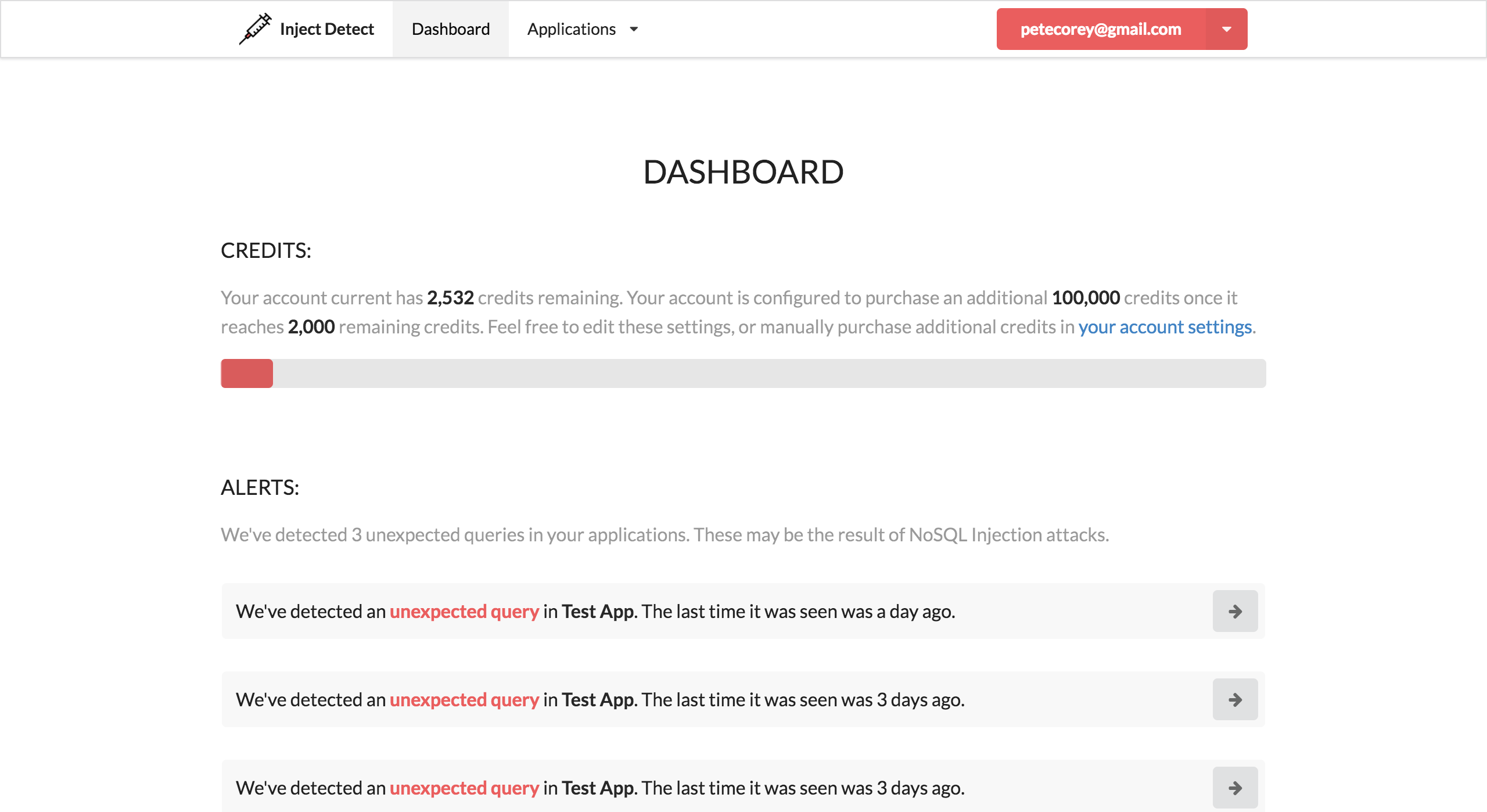 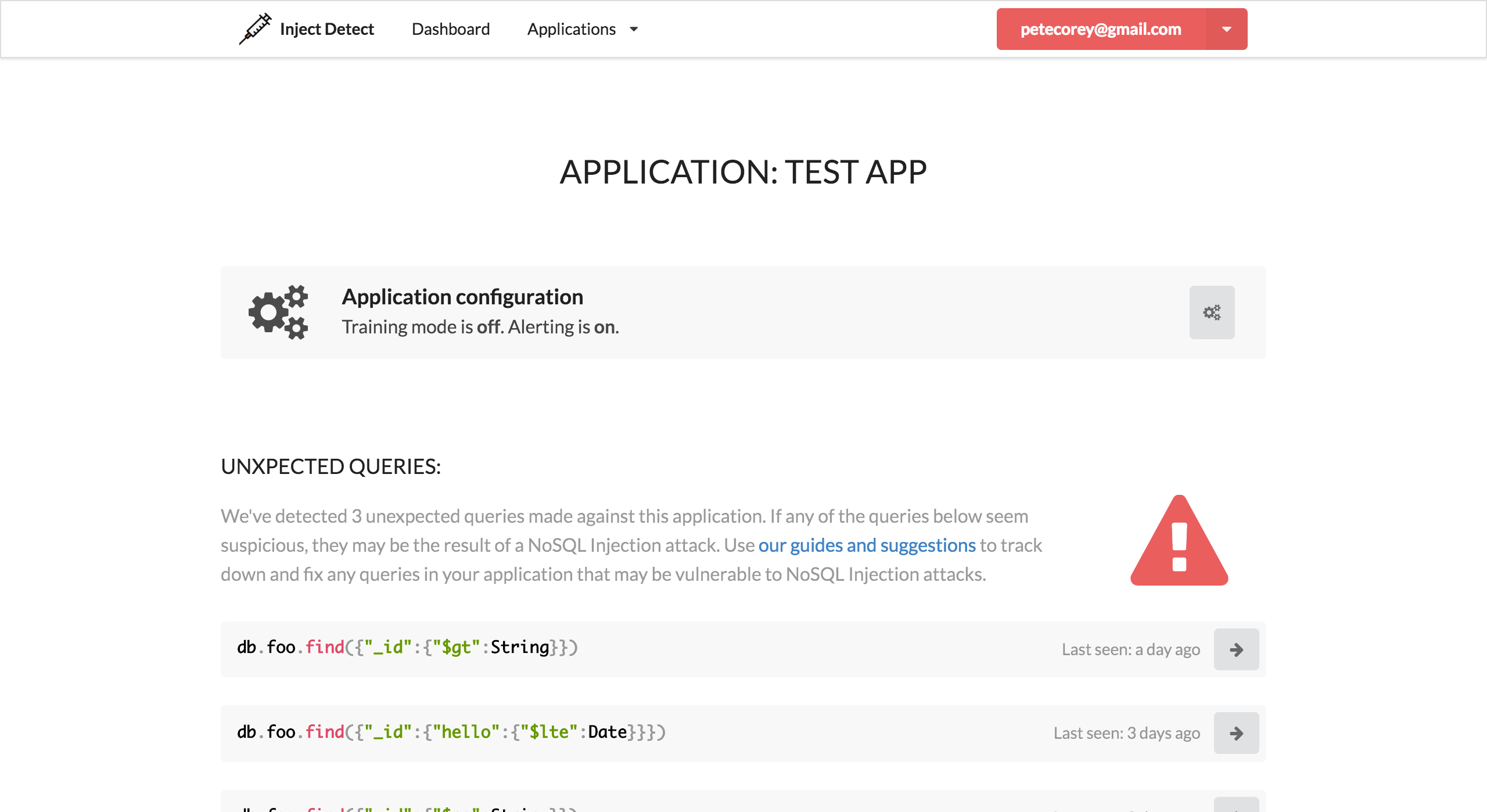 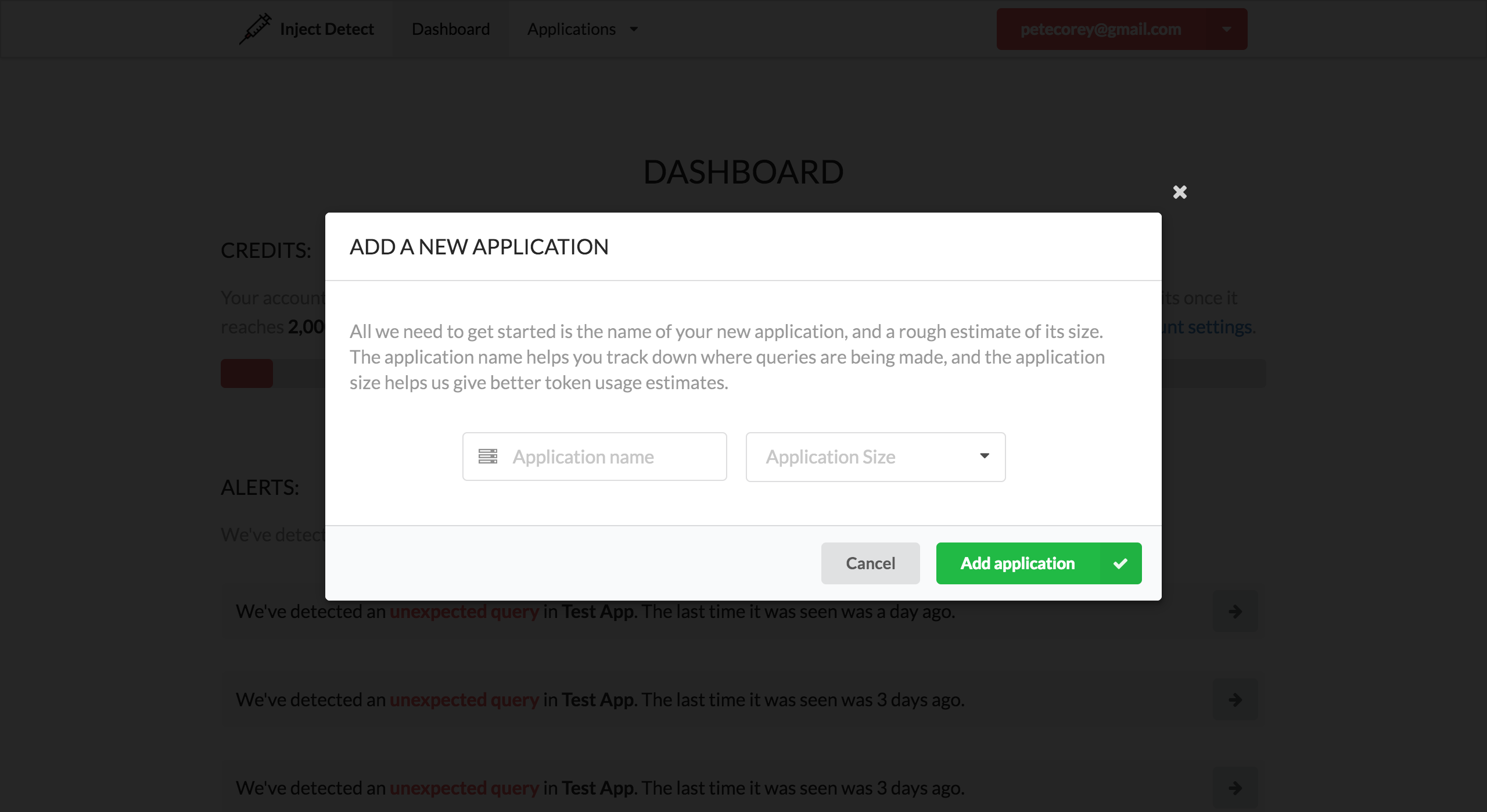 Since NoSQL Injection is a relatively unknown (but unbelievably common) vulnerability, I’m trying to incorporate healthy doses of education into its user interface.

I’m discovering that balancing education with brevity and clarity is a difficult thing to do.

Most of the first month of development was spent building out the back-end infrastructure and business logic to handle all of the various use cases of Inject Detect.

In my post about the high level design of Inject Detect, I talked about implementing the core domain of the application using Event Sourcing.

So far, I’m very happy with this choice.

Let’s look a little closer at some of the design decisions I’ve made, and dive into what it means to be an “Event Sourced” system.

Interactions with the system are done through “commands”. A command is just an instruction for the system to do something. Based on the current state of the system, the processing of a command will either return a list of events representing the changes to the system, or an error.

Keep in mind that events don’t actually modify the system in any way (write to a database, etc…). They just return a list of events, side-effect free.

Diving into the code, a command is just an Elixir struct. For example, here’s a command to toggle “alerting” on an application in Inject Detect:

The struct holds all of the information we need to carry out the command. In this case, we just need the application_id of the application in question.

Each command implements a Command protocol, which means it defines a handle function. Command.handle takes in the command struct being handled and a “context” map, which in our case holds the currently signed in user.

Our handle implementation for the ToggleAlerting command looks like this:

If the current user has permission to toggle alerting on the specified application, we return either a TurnedOffAlerting event, or a TurnedOnAlerting event.

Otherwise, we throw an authorization error.

Events, like commands, are just Elixir structs. The TurnedOffAlerting event we mentioned earlier looks something like this:

We basically just dig through our application’s state structure, finding the application we care about and we set its alerting key to false.

Inject Detect is storing application state entirely in memory as a Memory Image.

This means that Inject Detect isn’t using a database to hold information about the application’s users, applications, and queries. The only thing being stored in the database is a stream of events.

Instead, Inject Detect stores this stateful information in a long-lived GenServer process. Every time we grab the application’s current state (InjectDetect.State.get), it queries the database for any events that have happened since the last get, applies them using Reducer.apply, and then returns the resulting state.

This was definitely the most radical decision I made while building Inject Detect, but in my experience so far, it has proven to be incredibly powerful.

I definitely made some adventurous design decisions when implementing Inject Detect’s back-end. So far, I’m incredibly satisfied with my decisions to date.

I’m eager to see how they perform under continued development, load testing, and real-world usage.

I’m planning on writing more articles outlining and detailing these design choices in the future. If you’re particularly interested in any one aspect of this system, reach out and let me know!

While I didn’t mention it in this post, the Meteor plugin component of Inject Detect is essentially finished. The back-end portion of the projects is a few loose ends and a few missing features away from being completed. The front-end of the application represents the bulk of the remaining work, but it’s moving along at a steady pace.

I expect to be ready for beta testing for a small number of real-world users in the next one or two months.

If you haven’t yet, be sure to subscribe to the Inject Detect newsletter to get official news on the release as soon as it’s ready!

This article was published on May 1, 2017 under the ElixirEvent SourcingInject Detect tags. For more articles, visit the archives. Also check out the work I do, and reach out if you’re interested in working together.